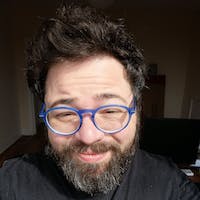 Subscribe to my newsletter and never miss my upcoming articles

The times they are a-changing

My last post here was in September 11th, 6 days later my daughter was born and everything changed. I mean, EVERYTHING! During the whole pregnancy, people used to say that our lives were about to be changed forever; I had this clear idea in mind, but, man, I wasn't prepared for this monumental love tide that would turn our lives around and make us feel that there is, indeed, no greater love. The cliche is real!

Well, I used to think that working full-time, parenting and still finding the time and energy at the end of the day to sit and code would be close to impossible. I was wrong, again. In fact, it is really difficult to manage all these activities in a day - let's not forget about the domestic work that also takes a lot of time and energy and that we need to sleep! - however I was able to find a real motivation to be a better person and pursue my career goals. I want to do it for her. She deserves the best from me, even if, in the end, the best I can provide comes down to the effort I've made. She is just a baby and relies on me. So yes, I will sit down and learn every single day, even if it's just for 10 minutes.

So, tech-wise I've been learning a lot since September! I took some inspiration on these guys and made the shift: instead of staying constrained within the tutorials projects, I decided I needed to build something. I detected a problem I had and created a solution: a password-generator. At work I use some applications that need a password reset every month and due to security reasons there are a lot of criteria to be fulfilled, so I created an app to generate random passwords following exactly the criteria these applications need. And it worked! How empowering does it feel?

Not only I've built an app from scratch, and learned a new framework in the process, but I've deployed it to Heroku. Deploying this application was a bit of a nightmare, but when I finally managed to complete the process and I was able to see it live and functional, I realised how much I had learned. I noticed I had NO IDEA of what it actually meant to deploy an application. In the end, I had to learn about Linux, Docker, environment management, servers, networking and so on.

This app I've mentioned was built using Flask, a Python framework for web development. But since September I got to experiment with a few other things and started to learn Java, a little bit of C++, Ruby, Bash scripting etc. Really, it's a lot of stuff. And to organise these topics, I'll start writing about them from now on.

This post was thought and written while I was listening to this!

As I've mentioned, I ended up being in contact with several different technologies over the last 6 months, mostly by an experimental approach - and having a LinkedIn Learning account at work made it a lot easier! However, we can't learn everything, unfortunately. We always need to make choices and leave some things behind or put them off in order to prioritise others. Figuring out what can be put off and what is priority is the key, and that's the main reason why I want to write about it here: to think.

I hope you enjoy this journey of mine and I hope my thoughts can help you somehow.